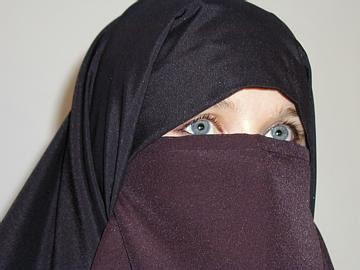 I'm not usually on board with the editorial positions of the Globe and Mail, but today is an exception. Bravo, G&M. Kudos.

I offered some thoughts on the trumped-up controversy over niqab before, and the band-wagon reaction of some European politicians. But now the matter has taken an ugly turn here at home. The political chiefs of three parties are busy selling bigotry for votes in Quebec by-elections, while the NDP quietly wrings its hands and mumbles instead of speaking out forcefully. And Muslim leaders are left scratching their heads.

A senior public employee, Marc Mayrand of Elections Canada, is under sustained attack for daring to uphold the law. The man deserves an Order of Canada for his grace under pressure. Stephen Harper is at his hectoring, bullying best from halfway around the world, and Stéphane Dion has revealed himself to be a shameless panderer and weakling—no surprise there, alas.

Not long ago Andrew Coyne said aloud what many have been thinking for quite a while now. Canadian politics is simply stupid. And there are all kinds of stupid, it seems, including a blockheaded hérouxvillisme at the highest political levels. What a godawful way to observe the anniversary of 9/11.

UPDATE: (September 12) The trash-talking ignorama Sheila Copps weighs in. Someone pass the tequila....