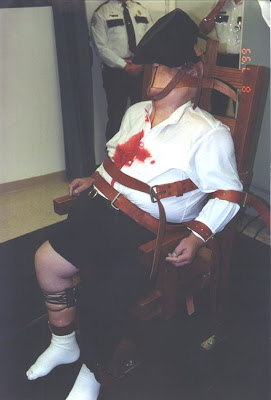 Between 1977 and 1997, nearly one person a day was executed in the US--6,143 people, gassed, hanged, electrocuted, lethally injected or shot.

The deterrent effect of capital punishment has been debunked to a fare-thee- well--or so I had thought, until the appearance of a new study that has the right side of the blogosphere all a-twitter with anticipation. The authors claim that each execution in the US deters 5-6 homicides, while three pardons generate 1-1.5 new murders. (Other researchers claim that as many as 18 murders are deterred per execution).

Plowing through the study, I came away convinced that the authors were mistaking correlation for causation. Other odd correlations were discovered along the way, such as an inverse relation between unemployment and the homicide rate--perhaps looking for work takes up time otherwise occupied by plotting and committing murder.

Turning to Figure 1 in the article, it is remarkable that the over-all US homicide rate almost exactly parallels the homicide rate in states with the death penalty. To my untutored eye, this would appear to indicate the absence of a deterrent factor. But the curve for the execution rate does appear to be almost a mirror-image of the homicide rate. Hence we are asked to conclude that, overall, the latter is influenced by the former.

Someone more versed in statistics than I might throw some light on this. There are some learned refutations of such studies here

The studies avoid any direct tests of deterrence. They fail to show that murderers are aware of executions in their own state, much less in far-away states, and that they rationally decide to forego homicide and use less lethal forms of violence. A few studies measure newspaper accounts of executions,but no one knows the reading habits of murderers. Many have cognitive impairments, making it even more unlikely that they are aware of executions.
...

The studies fail to take into account the deterrent effects of Life Without Parole sentences (LWOP). LWOP has the same incapacitative effect as does execution...The omission of this alternate and competing explanation for the decline in murder rates in California and other states is irresponsible and borders on incompetence.

and here. But, in the meantime, some disturbing questions.

[although] the Supreme Court of the United States remains unconvinced that there exists racial discrimination in the imposition of the death penalty, recent research points to the possibility of such discrimination (Baldus et al. 1998, Pokorak 1998, Kleck 1981). Along the same lines, there is evidence indicating that there is discrimination regarding who gets executed and who gets pardoned once the death penalty is received (Argys and Mocan 2001). Given these concerns, a stand for or against capital punishment should be taken with caution.

Here the authors segue from a cold statistical analysis into the moral realm, where, if I may say so, the debate properly belongs. If we accept the contested proposition that executions have a deterrent effect, are we comfortable with the fact that Blacks and members of other minorities are in effect playing an above-and-beyond role in making America safe?

2) Let's take this a little further. In 2000, the Republican Governor of Illinois, George Ryan, blocked any more executions in his state until the incompetence and error that led to many convictions of the innocent in the first place had been thoroughly reviewed. In 2003, he took the unprecedented step of commuting the death sentences of 167 individuals convicted of murder.

But if the statistical argument for deterrence is sound, does it matter whether or not the condemned are innocent or guilty? If every execution prevents up to 18 homicides, who cares about DNA and other means of exoneration? If state killing indeed works so wonderfully well for the public good, why not take the old che sera sera approach? If you're innocent, well, you're just taking one for the team.

3) And why stop there? We don't just want a society where murder no longer happens. We're not all that keen on rape, burglary, GBH and jaywalking, either. Why not be literally Draconian, and make every crime a capital crime? [That has a nice right-wing sloganic ring to it, doesn't it?]

Hey, don't laugh. Even relatively minor punishments like flogging and amputation, not to mention stoning and beheading, apparently work like a hot-damn in Saudi Arabia.* Do we want a crime-free society or not? If so, time to man up and do what has to be done.

4) With me so far? Then let's pursue this to the final conclusion:

The lazy are slaughtered
the world grows industrious

The ugly are slaughtered
the world grows beautiful

The foolish are slaughtered
the world grows wise

The sick are slaughtered
the world grows healthy

The sad are slaughtered
the world grows merry

The old are slaughtered
the world grows young

The enemies are slaughtered
the world grows friendly

The wicked are slaughtered
the world grows good

____________________
*"The severity of penalties and the rigid system of enforcement were credited by both officials and ordinary citizens with contributing to the high standards of public safety. Supporters of severe punishment believed that, although carried out infrequently, a beheading or stoning reminded the people that such penalties remained in force."
Posted by Dr.Dawg at 10:50 AM

Hello.
I know this is kinda off topic however, I'd figured I'd ask.

Would you be interested in trading links or maybe guest
authoring a blog post or vice-versa? My site goes over a lot of the same
subjects as yours and I believe we could greatly benefit from each other.
If you're interested feel free to drop me an email. I look forward to hearing from you! Superb blog by the way!

It's actually a great and helpful piece of info. I am happy that you shared this helpful info with us. Please keep us up to date like this. Thanks for sharing.

Here is my page: visit