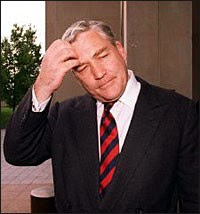 Was it simply because the American justice system is not only bigger and tougher, but faster than its Canadian counterpart in laying charges?

James Stribopoulos, a professor at Osgoode Hall Law School in Toronto, thinks that could well explain it.

That happens all the time in drug cases, where it's not uncommon for Crown counsel to cede jurisdiction to U.S. authorities – and do so gladly, fully appreciating they are "delivering a bad guy" to face sentences far more severe than a Canadian court would hand down, he said.

It's for that reason Stribopoulos believes prosecuting Black in Chicago not only made little sense, but resulted in "a real injustice."

Con Black: the Maher Arar of millionaires. Too bad he gave up his Canadian citizenship--we could have sent down Franco Pillarella.