Rush to the gutter 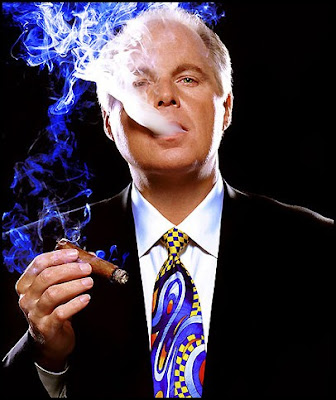 He's calling for the return of segregation, throwing all caution to the winds. Or is he?

Some earlier Limbaugh commentary to set the scene:

He didn't say it, but -- anyway, there are those out there -- greetings.

Then there was Obama, the "magic Negro". We should remind ourselves that he's been at this sort of thing as far back as the 1970s.

Hey, what's a racial slur or two, and an approving reference to Jim Crow? Can't you coloureds take a joke? According to the Rightweasels, after all, he's just being...humorous. And indeed, here is what he has to say himself on that subject:

Well, that's what we always do here. We do parodies and satires on the idiocy and the phoniness of the left.

Do they have a point? Well, admittedly they do--to a degree. Limbaugh has matured considerably from the "take that bone out of your nose and call me back" days. He's become a master ironist, recalling that irony always implies a double audience. Most recently, with the emergence of so-called "dog-whistle politics," irony is achieved through the use of code, a use that comes with its own plausible deniability ("Code? What code?").

But this isn't Limbaugh's game. There's method in his "humour"--when he's being humorous, that is, rather than straightforwardly hateful, as in, "Let's face it, Obama's Black, and I think he has a chip on his shoulder."

As Think Progress points out in reference to that comment, Limbaugh's Obama discourse is racialized to the hilt:

This is not the first time Limbaugh has characterized Obama as an angry black man. On his radio show in March, Limbaugh said Obama "has a chip on his shoulder, and his wife does too, and they are some angry people." Limbaugh has also chastised people for being afraid to "criticize the little black man-child", referred to Obama as "Barack the Magic Negro," complained that he “disowned his white half” and warned that Obama is of "Arab-African" descent. Nevertheless, Limbaugh says race is not an issue for him.

Well, yes it is, Rush, from your intertextual reference to "Little Black Sambo" to the repeated use of the angry (dangerous) Black stereotype, to the racial sniping about Obama's origins.

But irony does kick in when, for example, he picked up on a progressive Los Angeles Times piece that had addressed the "Magic Negro" trope--the benign Black with strange powers who suddenly appears to assist whites in a jam (which I think goes back at least as far as Jim in Huckleberry Finn, and is parodied in the character of "Chef" in South Park).

He was allegedly sending up the (African American) writer who, in a short thinky piece caricatured by Limbaugh, identified the trope in current American political discourse. But Limbaugh was also, by going on and on as he does, perpetuating his deliberate racialization of the Obama candidacy. That's what matters to his hard-core dittoheads, after all, not excursions into literature and film.

By the same token, his latest commentary about segregated schoolbuses, on one reading, is just a call for a "colourblind" America in an era of racial polarization that he blames Obama for perpetuating. Rejecting out of hand the assurances from local law enforcement that the incident in Belleville St. Louis was one of bullying, not of racism, he says:

I think the guy's wrong. I think not only it was racism, it was justifiable racism. I mean, that's the lesson we're being taught here today. Kid shouldn't have been on the bus anyway. We need segregated buses -- it was invading space and stuff. This is Obama's America.

Now this is layered stuff. Rush is not stupid, and he shouldn't be underestimated. He cheerfully joins in with other race-baiters like Michelle Malkin, and Drudge, and nutjobs like this one (who refers to Black kids having an animated political discussion in a subway as "thugs"). But there's a textured elegance to what he does.

He is here accusing the Black students of racism, and at the same time lampooning the Left view that racial discrimination can generate reactive anger and violence. The inclusion of the word "justifiable" is clever: it is not, of course, the Left view, but it encapsulates a farily common conservative accusation.

Where does this lead? he asks rhetorically. Why, to Jim Crow in reverse, which is still, of course, Jim Crow.

But at the same time he is the one who is introducing race into the discussion: in fact, he is constructing a racial discussion. The police chief in Belleville St. Louis quickly withdrew his earlier suggestion that the incident was racial in character. A Black student broke up a second attack on the white student. He didn't believe the incident was racial: other white kids on that bus have never been attacked, he said. It was just a case of bullying.

How "post-racial" can you get? But Limbaugh wasn't about to let this opportunity slip through his pudgy fingers. He and his shrieking cohorts insisted upon re-writing the narrative as a racial parable, on no evidence whatsoever--indeed in the teeth of the evidence. It was damned well going to be an instance of reverse racism and its alleged condonation or encouragement by a Black president, and that was that. Race war, looming on the horizon. Helter Skelter.

This, then, is the underlying message of Limbaugh on the Belleville St. Louis incident, and it's one that his dittoheads will absorb through the pores. Is he calling for segregation? No. But he's pushing an apocalyptic racial-panic politics whose poisoned roots lie firmly implanted in the sordid Jim Crow era.

Any day now he'll find a way to use the n-word. Count on it. All in fun, of course. Just sending up the Left. And in the present ergotized American political climate, that could add another few million listeners, who don't give a toss about "parody" or irony, if they even understand the concepts, but get the message directly intended for them. In the proud tradition of on-air conservative demagogues like Gerald L. K. Smith and Father Charles Coughlin, Limbaugh is just telling it like it is.